Wahluke football and their new head coach, Anfernee Cortez, set their sights on making the most of the shortened season this spring after the schedule was shortened and postponed due to COVID-19.
Casey McCarthy

Anfernee Cortez waits eagerly to kick off his run as head coach of the Wahluke High School football team after a couple of seasons with the team as an assistant.

MATTAWA — Wahluke head coach Anfernee Cortez has had some extra time this fall to prepare for his first season as head coach of the Warriors football program after the fall athletic season was postponed due to COVID-19.

After a couple of seasons as an assistant coach with the Warriors, Cortez said it is nice having a little extra time to get settled as he takes over the reins this year.

“Being a first year coach, I wasn’t sure on a lot of things,” Cortez said. “But it’s given me a lot of time to prepare and finalize a lot of things I want to get implemented in this program right off the bat. The bad part is I haven’t been able to do anything with it yet, but that time’s come and gone.”

Currently, he said, he is focused on keeping in touch with his student athletes as much as he can while making sure he has everything prepared on his end. In the event the go-ahead is given to hold practices in October or November, Cortez said he wants his players to be ready to go.

He said this summer has been spent making sure the offense, defense AND practice schedules are ready to go when the green light is given. Making up for the lost practice time in the spring and summer will mean keeping the team committed to learning the system and terminology on their own.

“On my end, I’m just making everything simpler for them, not putting in too much because we’re already limited with what time we have,” Cortez said. “And then with the shortened season it’s just not enough time to do a lot of the things I would want to do.”

The Warriors coach said he’s holding out hopes of getting extra practice time in before the season begins, but said it will be a challenge competing with other sports schedules this winter and spring.

The team is already behind on conditioning and workouts after missing out on spring and summer training, he said. Players simply won’t be as ready as they normally would for the season after coming off the typical summer preseason, he said.

Cortez said he expects teams will take some time to get comfortable on the field this year given the circumstances.

“I expect it to be really rough and to be slow and patchy with the players because, like I said, we don’t get the whole summer to condition them and prepare them for the fall,” Cortez said. “It’s pretty much fitting a whole spring and whole summer into a couple of weeks.”

The goal every year with his team is building relationships with his players that will stick with them beyond their time on the gridiron. Stepping in as head coach this season, Cortez said he believes that role is even more important now.

For his players, he said he hopes they can have a memorable season where they are able to build a kinship between themselves. Through the coaching process, he said he’s hoping to instill some lessons about respect and character that can be carried with them off the field.

“I’m big on character and discipline and how you portray yourself, so those are important lessons and life skills to have,” Cortez said.

A self-proclaimed “football guy,” Cortez said it’s been tough watching football on the weekends and not being able to be on the field too. Given the circumstances, he said his focus remains on simply wanting what’s best for the community, his students, and himself.

While he would enjoy being able to hit the field this fall, he said he understands that might not be in the best interest of the team at this time.

“I’d like to be out there and play some football and get the guys out there because I know they want to be out there,” Cortez said. “But at the same time, under the circumstance, it’s really understanding.” 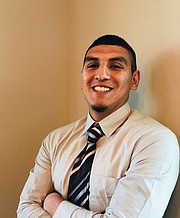 Anfernee Cortez waits eagerly to kick off his run as head coach of the Wahluke High School football team after a couple of seasons with the team as an assistant.